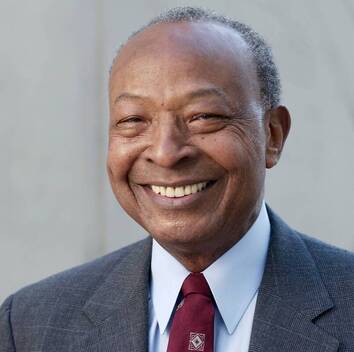 ​Charles "Chuck" Johnson, Jr.
July 28, 1927 - December 14, 2021
Charles Johnson, MD, Professor Emeritus of Medicine, passed away on December 14, 2021, at the age of 94. Dr. Johnson joined Duke in 1970 as the first Black faculty member in the School of Medicine and first Black physician on the faculty of Duke University. He served on the faculty of the School of Medicine for 26 years until his retirement in 1996. Dr. Johnson will be remembered as an outstanding clinician, mentor, leader, and pioneer, breaking barriers and paving a path forward for so many that came after him.

Dr. Johnson was born on July 28, 1927, in Acmar, Alabama. He earned his BS degree in physics from Howard University in 1953. During that time, he also served in the U.S. Air Force, rising to the ranks of captain and serving as a fighter pilot. He entered medical school at Howard University in 1959, graduating in 1963. He spent the last two years of medical school at the Walter Reed Army Institute of Research, Bethesda Naval Hospital, and the National Institutes of Health. From 1964-1966, he conducted his internship at District of Columbia General Hospital in Washington, D.C., followed by a residency in medicine at Lincoln Hospital and Duke University Medical Center. From 1966-1967, he did a fellowship in endocrinology at Duke in the Department of Medicine. From 1967-1970, Dr. Johnson was in the private practice of internal medicine and endocrinology in Durham, also serving as a clinical associate in medicine at Duke.

On September 1, 1970, on the recommendation of Eugene A. Stead Jr., MD, former chair of the Department of Medicine and physician-in-chief of Duke Hospital, and with the approval of James Wyngaarden, MD, then chair of medicine, Dr. Johnson was appointed assistant professor of medicine in the Duke University School of Medicine and moved his practice to the Private Diagnostic Clinic (PDC). In 1974, he was promoted to associate professor of medicine with tenure, and in 1995 Dr. Johnson was promoted to full professor. He retired in 1996 but remained a professor emeritus and an active and treasured mentor and leader for Duke faculty and students until his passing.

The late Brenda Armstrong, who served as associate dean of Medical School Admissions for 20 years and was a pioneer herself, in 1996 said of Dr. Johnson, “His views have had a major impact on me and many others. For a long time, he was the only one pushing for change — and sometimes people gave him heat for that, because he was completely honest — but his influence on the medical center has been enormous. He’s helped show the rest of us how to make Duke a better place.”

While at Duke, Dr. Johnson served on the Medical School Admissions Committee, where he was instrumental in improving Duke's recruiting practices to attract more diverse candidates. By the time he retired in 1996, Duke had minority faculty and house staff in every clinical department, and more minority medical students than ever. In 1997, Dr. Johnson was appointed and served as special advisor to Dr. Ralph Snyderman, chancellor for health affairs at Duke from 1989 to 2004. He also served on Duke’s Athletic Council. In 1997, Dr. Johnson was awarded the Medal for Distinguished Meritorious Service to Duke University, Duke's highest award. He received the Julian Abele Award for Outstanding Service to Duke University and the larger community in 1985 from the Black Professional and Graduate Students of Duke.

Dr. Johnson was an active member of the National Medical Association (NMA), the Black counterpart to the once-segregated American Medical Association. On July 29, 1990, he was inaugurated as the 89th president of the 16,000-member NMA. He also served as an advisor on aging and health issues facing African-Americans at the university, state, and national levels. He was a delegate to the 44th World Health Assembly in Geneva, Switzerland, in 1990 and was an active member of many medical, civic, and religious organizations.

“Dr. Johnson’s influence and impact on Duke University and in particular the School of Medicine and Duke University Health System cannot be overestimated,” said Mary E. Klotman, Dean, Duke University School of Medicine. “He is an institutional treasure, and we will miss him and his wisdom, kindness, and tenacity. And while we can see and feel the bearing of his legacy, we know that together we must continue our work, sharing Dr. Johnson’s vision for greater justice, diversity, and inclusion across our institution and beyond.”